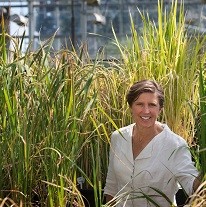 "Serving up Science: Plant Genetics and the Future of Food"

Pamela Ronald, is a Distinguished Professor, in the Dept. of Plant Pathology and the Genome Center, and Founding Director of the Institute for Food and Agricultural Literacy at the University of California, Davis. She also serves as a Key Scientist at the Joint Bioenergy Institute in Emeryville, CA.

Ronald studies rice genes that control resistance to disease and tolerance to environmental stress. Ronald and colleagues received the 2008 USDA National Research Initiative Discovery Award and the 2012 Tech Award for innovative use of technology to benefit humanity. In 2011, Ronald was selected as one of the 100 most creative people in business by Fast Company Magazine. She is the recipient of the 2012 Louis Malassis International Scientific Prize for Agriculture and Food, a Guggenheim Fellowship, the National Association of Science Writers Science in Society Journalism Award, and the Fulbright-Tocqueville Distinguished Chair Award.  In 2014 she was named one of the world’s most influential scientific minds by Thomson Reuters, in 2015 was selected by Scientific American as one of the world’s 100 most influential people in biotechnology and in 2016 was named one of the 50 innovators and visionaries who will lead us toward a more sustainable future by Grist magazine. She is co-author, with her husband, Raoul Adamchak, an organic farmer, of Tomorrow’s Table: Organic Farming, Genetics, and the Future of Food. Bill Gates calls the book “ a fantastic piece of work” and “important for anyone that wants to learn about the science of seeds and challenges faced by farmers. In 2012, Tomorrow’s Table was selected by The New Earth Archive as one of the 25 most powerful and influential books with the power to inspire college readers to change the world. Her 2015 TED talk has been viewed by more than 1.7 million people and translated into 26 languages.