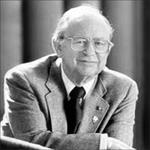 Born in Greenwood County, Kansas, April 13, 1923, to Sidney and Josie (Tucker) Castle. He attended one-room county schools through the eighth grade and graduated from Oxford Rural High School in Kansas in 1941. He managed a general store for one year before enrolling at Kansas State University in 1942.

His education was interrupted by World War II. Emery joined the Army Air Force early in 1942 and became a radio operator on B-17s in the 8th Air Force, 100th Bomb Group. Based in England, he participated in thirty bombing missions over Europe and was awarded the Air Medal with Four Oak Leaf Clusters. He was discharged in 1945.

In the year following the war’s end, he married Merab Eunice Weber of Wichita, Kansas. He returned to Kansas State, earning bachelor’s and master’s of science degrees in 1948 and 1950. Emery was awarded a PhD at Iowa State University in 1952 and became an economist at the Federal Reserve Bank of Kansas City.

Dr. Castle spent most of his professional career at Oregon State University, beginning in 1954 as an assistant professor in the Department of Agricultural Economics. Subsequently he served as department head, dean of faculty, and dean of the Graduate School.

In 1975, he joined Resources for the Future (RFF), a public policy research institute in Washington, D.C. as vice president and named president in 1978. While at RFF, he guided the institute to financial independence from its founder, the Ford Foundation.

In 1986, Emery returned to Oregon State University as the first chair of a newly established University Graduate Faculty of Economics.

Throughout his career, he performed public service at both the state and national level, including appointments by five Oregon governors to various state boards and commissions, including the Water Policy Review Board and the Environmental Quality Commission.

He was a fellow of the American Academy of Arts and Sciences, the American Association for the Advancement of Science, and the American Agricultural Economics Association. He received distinguished service awards from both Oregon State and Kansas State Universities. In 1997, he was awarded an honorary doctor of humane letters degree from Iowa State University and received the same degree from OSU in 2006. In 2006 the Rural Sociological Society bestowed its Distinguished Service to Rural Life Award, and OSU’s College of Agricultural Sciences conferred its Hall of Fame Award in October 2017.

An accomplished rose grower and exhibitor, he served as a consulting Rosarian and Accredited Rose Judge for the American Rose Society. He was instrumental in the development and maintenance of rose gardens in Avery Park and at the First United Methodist Church in Corvallis. While in Washington, DC, as president of RFF, he established a rose garden in the courtyard of the Resources and Conservation Center, which was dedicated in his name during RFFs 50th anniversary celebration in 2002.

In 2010, Castle wrote his autobiography, Reflections of a Pragmatic Economist: My Intellectual Journey, published by the OSU Press. He is the author of Farm Business Management and editor of The Changing American Countryside: Rural People and Places.

He was preceded in death by his wife, Merab, and his second wife, Betty Thompson Burchfield Castle. He is survived by his daughter Cheryl Castle Rogers of Portland; brother Donald of Manchester, Massachusetts, his stepchildren Rick (Joan), Darcey, and Robert (Wendy); five grandchildren, three great-grandchildren, and nieces and nephews.

A memorial service will be held at the Corvallis First United Methodist Church at 3 pm on November 11, 2017, followed by a Celebration of Life at the LaSells Stewart Center at 4:30 pm on the OSU campus.